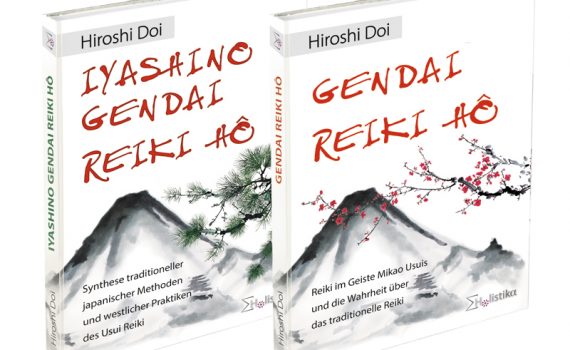 For international people interested in I would like to give some information about the running project of translating Hiroshi Doi books into German language. It´s a 20,000+ dollar project that I take responsibilty of, being a Gendai Reiki Hô master myself and managing two editorials in Germany with an over ten years experience in the professional book production and distribution market.

How did the project start?
Switching after years from Western Reiki to Gendai Reiki Hô I got to know Hiroko Kasahara, Japanese Gendai Reiki Hô teacher and living in Germany. She adviced that she has not successfull in finding an editor in all that years willing to publish translated Gendai Reiki Hô books and taking the risk. I showed interest and have been suggested to publish the book „Gendai Reiki Hô“ that appeared in Spain in autumn 2015 translated from Japanese into German by Hiroko Kasahara herself. Being in contact already with William Lee Rand, who after revising owns the publishing rights of the book „Iyashino Gendai Reiki Hô“ I finally decided to publish both. The financial investment was too high to risk a second publisher with possible success threatening lower sales price policy. So a contract was done with Hiroshi Doi for the German edition of „Gendai Reiki Hô“ and with William Lee Rand for the German edition of „Iyashino Gendai Reiki Hô“ at nearly the same time in spring 2016. Last mentioned book I translate myself from English into German.

Who are the people involved?
Beside Hiroko and me translating the books, first there is a lecturer to name, profesionally correcting the texts. That is Ralf Lay, working for international accepted healers like Rüdiger Dahlkle. Helmut Vogelsang is a skilled advertiser with whom I have a fifteen years working experience. Finidr printing company, after publishing around twenty books, the best to get as I consider. Finally to mention Artha editorial service. Leading in distributing German language spritual literature and presenting their products at around eighty fairs and exhibitions each year in Germany, Austria and Switzerland.

What is the time shedule and present situation?
Both books are translated already. At this moment, middle of January 2017, a correction reading takes places. Soon the books will be lectured what takes approximately one month. After that the layout, which means combinig text and illustration as well as making the subject index, takes another month. As well printing and delivering the books takes one month. Counting together means books will appear in/after May 2017. In addition to the book store supply, the Reiki books will be presented by our distribution partner Artha at around eighty fairs and exhibitions around healing and spirituality in Germany, Austria and Switzerland. To the book experts as well as to the readers the titels will be shown at the Frankfurt book trade fair in October 2017 and Leipzig book trade fair in March 2018.

Some information about the editor
Beside the editorial business and practicing Reiki I am as well a healer with a training accepted by the leading healer association (Dachverband für Geistiges Heilen DGH) in Germany where I am a member. More than that I am member of the Reiki profession union (Berufsverband Pro Reiki) in Germany, where standards and certificates are established to guarantee the same high Reiki training and practicing level.